Skip to content
In just its fifth year, the after school Theater Arts credited course has brought a new performance opportunity to County Prep students, who are learning both performance and rehearsal practices, and are encountering first hand all of the aspects of professional theater. This year in particular has been special due to having complete live accompaniment by our special guest renowned pianist Craig Ketter, under the direction of our wonderful Musical Director, Valerie Gonzalez. The show was designed by our professional lighting designer, Mr. Lance Michel and was directed by Ms. Shields. Ms. Singer, assistant director, designed the beautiful costumes.

This year the course focused on rehearsing and performing the musical The Fantasticks, a story about young love that learns to mature and grow. This coming of age journey sparkles along the way with tender moments, fun encounters , dreams and nightmares. Yet, at the end, a lesson is learned, and we are reminded that this journey is  quintessentially a directed spectacle of sorts. The magician is none other than El Gallo, helped by his assistants the Mime, four other deliberately strange ensemble characters, and two hired actors. As the creators of the show put it, “The Fantasticks is a musical about illusions: the illusions of young lovers, the illusions of their parents, the illusions of the old actors. But most of all, it is about the theatrical illusion itself, that tacit agreement between the artists and the audience to create an imaginary world together, to transform a few scraps of torn paper into gently falling snow. “ (Tom Jones and Harvey Schmidt, Creators, Director’s Guide)
County Prep’s rendition of the musical was quite a success. The response has been overwhelming. There has been lots of buzz around the school of audience members sharing their favorite moments. Some called it “a magical and riveting experience,” others felt “transported to a fantasy place,” and some pointed to being surprised by the quality of the singing and the acting, and the virtuosity of our pianist.
Directed by Ms. Shields, assisted by Ms. Singer, this piece was chosen to showcase our performers this year. Adam Hassan starred in the role of El Gallo, with Kailyn Vazquez as Louisa, and Kyle Velazquez as Matt. The cast also included Senior Alyssa Massa, Juniors Delana Ramos and Cindy Ramos, Sophomores Sirena Morales, Jahn Camac, Melina Quispe and Nathaniel Delva, and Freshmen Dynajah Smith, and Jezirah Ortiz. This production was overall an ensemble piece, where each performer was involved at all times, either on stage in numerous group numbers and scenes, or backstage preparing the set, props, costumes, and program. Special recognition also goes to our follow-spot operator, Katherine Castro, lighting technician Juliana Yeung, sound technician, Frankie Hoffer and stage manager extraordinaire Alexis Medel.
Ms. Shields, Ms.Gonzalez and Ms. Singer are very proud of all of the cast and crew whose work has developed through our premiere rendition of this Broadway classic. 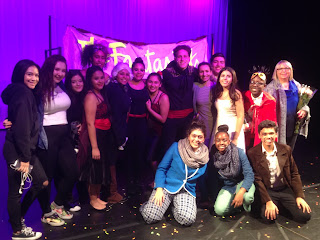 The Fantasticks is presented through arrangement with Music Theatre International (MTI)

All authorized performance materials are also supplied by MTI. www.MTIShows.com.com