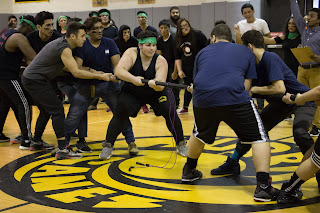 On February 25th, County Prep High School held its first ever Battle of the Classes tournament. The tournament consisted of the 4 classes: Freshmen, Sophomores, Juniors, and Seniors. Each class competed against each other to win the “Battle of the Classes” trophy. The tournament consisted of 4 events: grand relay, three-point shootout, tug-of-war, and – the most anticipated – the dance battle. The Seniors were victorious and came in first place. The Sophomores came in second, Juniors came in third and Freshmen came in fourth. Special thanks to Kishan Patel, Patricia Ramirez, and Joseph Mamaril who served as the event coordinators. Another special thanks to Snehal Patel, Karina Pereira, Danielle Cortez, Krishna Patel, Jai & Shivam Amin, Zohaib Shahid, Paras Agrawal and all the teachers who helped judge the event.