Only two weeks after our very successful run of Jekyll&Hyde, County Prep Theatre Arts improvisers performed in our second annual competitive improvisation event on February 12, 2016. The battling teams, Chaplin and the Stooges and Bad Biscuit competed in a series of improv games as part of a fundraiser for our theatre department. Although Bad Biscuit took the trophy this time around, defeating the reigning champions, all our performers won the hearts of our audience. 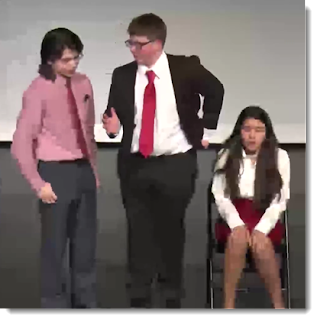 The show was hosted by Seniors Jose Lupianez and Joshua Dunn, who were also representatives of the competing teams. As usual, the show was created with audience participation. The audience picked places, relationships, movie titles, everyday activities, gave quotes from movies to be integrated in the games, and received sports related gifts in return. Sophomores Brianna Zdyb and Stephanie Galarza cheered for the teams and Giancarlo Miranda played the role of a very serious referee.

The two teams took turns in winning the applause of the audience in games such as Getting to Know You, Whose Line Is It Anyway?, Sportscasters, Monologues, Movie Critics, Master and Servant, Taxi, What Are you Trying to Say?, Director, Dubbing, and Scenes From A Hat. While Joshua and Jose were trying to outplay and out sing each other, by bringing up various antics throughout the show, the audience had a blast and enjoyed every minute of it. 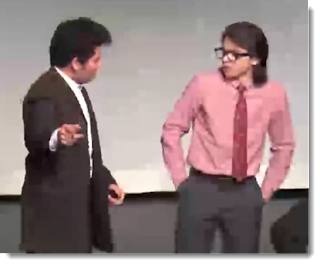 Finally in the end the teams battled it out in the game Scenes from a Hat, where each team had to come up with fast creative ways of joking about random topics. After a nail-biting run, the audience decided and Bad Biscuit took the second Annual Jamboree trophy. Ms. Shields is extremely proud of her extraordinary creative improvisers as well as the technical crew of the evening; student sound and lighting technicians, Julianna Yeung and Shannon Murphy, and house managers Jessica Camano, Jahn Camac and Kyle Velazquez. Thank you all performers and crew for such an amazing performance!