Skip to content
On June 4th and 5th 2015, Ms. Shields’ Theatre Arts program culminated the year with the performance of The Seagull. Considered one of the greatest plays of all times, The Seagull is quintessentially a play about unrequited love. Written by famed Russian playwright Anton Chekhov, the play is set in Russia, in a time of social and political turmoil, a time of the rise of the lower class and the tumbling of the aristocracy.
Inspired by the real-life incident of the death of a seagull, the play tells a poignant love story centered on literary non-entity Konstantin, played by Junior Jose Lupianez and aspiring actress Nina, played by Junior Samantha Killion.
At the center of this world swirling with several strong ensemble characters, we find our Matriarch, Irina Nicolaevna, a renown actress, admired by all, played by Junior Joshua Dunn. A web of love interests and heart aches pervade the rest of the characters which all seem to reflect Konstantin’s pain and suffering, and guide the subtle movement of the sad tale of devastated dreams and hopes to an unresolved end.
Such characters are Masha, played by Junior Alexia Velazquez, Medvedenko, played by Senior Chris Gawron, Sorin, played by Junior Gianni Ortega, Doctor Dorn, played by Freshman Matthew Casavecchia, Polina, played by Senior Flora Keim, Trigorin, played by Senior Isaac Martinez, Shamraev played by Junior Jonathan Dunn, Yakov, played by Freshman Jason Ortiz and the Cook played by Junior Lizzie Flores. What remains with the audience is a love for the beauty of life with its shortcomings and tears. This is the point of it all, as Chekhov himself puts it in the play: “the only thing that matter, Kostya is that one bears his cross and has faith.”
The prologue and intermission entertainment tried to recreate the concentrated historical atmosphere of that time, and to invite the audience to step into this world. This was achieved with the help of many ensemble actors who played Russian students, Russian gypsy musicians and other protesters. In the ensemble cast performed Senior Valerie O’Higgins, Junior Juan Ferreira, Sophomores Kailyn Vazquez, Nyzira Lynn, Alyssa Massa and Freshmen Julio Velazquez, Jason Ortiz, Matthew Riccardi, and Quinton Casillas.
The production would not be possible without the rest of the artistic crew: Kaylee Cox, Chris Ortiz, Sabrina Ceballo, Koutanding Wally and Julianna Yeung, who worked backstage during all the performances.
Mrs. Shields is very proud of the cast and crew. This production was also awarded the Judge’s Award at the Teen Arts Alliance Festival. 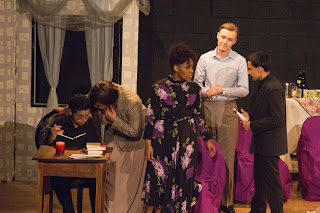