Skip to content
On May 31st, 2017, County Prep Junior Matthew Riccardi represented Hudson County at the State Teen Arts Festival, which took place at Ocean County College.  At this festival, the highest award recipients from all New Jersey Counties were invited. All theatre awardees performed, received feedback and took workshops with theatre professionals.
Matthew had officially received The Judge’s Award on May 23rdat NJCU, for his rendition of a Benvolio monologue from Shakespeare’s Romeo and Juliet. He had participated in the Teen Arts Competition, in the Small Group Drama Category.
Ms. Shields is very proud of Matthew who had wowed the judges with his understanding of the text and the honesty of his performance. 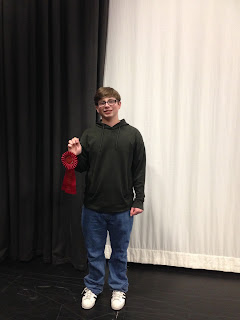