Skip to content
County Prep Dance Alumni Concert
The County Prep Dance Program held their first ever Alumni Showcase on Friday, January 8th. The event marked the 15th anniversary of the County Prep Dance Program under the direction of Ms. Heather Warfel Sandler.  22 dance alumni were involved in performing and video segments highlighting their current projects in the arts.  There was a packed audience including more alumni, parents, staff, and community members who were incredibly enthusiastic and impressed by the performances. The event was filled with emotion and
Director Ms. Heather Warfel Sandler had this to say about the event:
“I wanted to do something special for this anniversary.  I’m lucky to be in touch with many of my former students, and it became clear to me that the best way to celebrate the program was to celebrate THEM.  My teaching process and philosophy has been directly informed by their willingness to experiment, discuss, argue, create, and dance with me.  I have a very clear idea of what I believe is important in arts education, and I don’t take for granted that my students have helped me to define that philosophy.  As I started to reach out to find alumni who were still active in the arts, I realized that while they all came through this program, their work since then has been incredibly varied. That was so exciting to me and is one of the things for which I’m most proud! We are fulfilling our mission of using dance as a tool to open minds. This program is sending creative people out into the world, who are forging their own paths. There is a common misconception in the arts – especially dance – that if you pursue it you either “make it” or you go to your backup plan. This alumni concert proved that couldn’t be further from the truth.  Among these dance program alumni were professional dancers, choreographers, singers, producers, dance teachers, actors, future dance therapists, a yoga instructor, a praise-dance leader, a world renowned b-boy, a filmmaker, an arts administrator, a visual and performance artist, and even one who spent time on Capitol Hill working on arts legislation – ALL influenced by their dance education. I have worked with so many amazing young people through this program, many of whom have become my friends and colleagues. This was a great way to honor them and our program.” 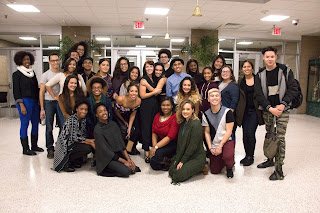