Skip to content
Circle in the Square Theatre School, the only accredited training conservatory associated with a Broadway theatre in NYC, had awarded County Prep Junior Kailyn Vazquez and County Prep Senior Elizabeth Flores full scholarships for their 7-week intensive Summer Workshop in Musical Theatre and Theatre respectively. The scholarship covered tuition, transportation and lunch stipend for the entire program. The musical theatre workshop consisted of various Acting Technique classes (Theatre Program), as well as Singing Interpretation, Music Theory, and Musical Theatre Scene Study (Musical Theatre Program).
The musical theatre program culminated with A Musical Cabaret performance on August 4th at the famous Triad in NYC, where Kailyn gave a very emotional rendition of the song Out Here on My Own by Michael and Leslie Gore, from the film Fame. The Musical Cabaret was directed by Sara Louise Lazarus, under Noel Katz’ Musical direction.
About her experience, in her own words, Kailyn said that it changed her in ways she never thought possible, helped her “explore herself as an actress and become more aware as a performer on a deeper level”. She loved the fact that the teachers and the students were right there by her side supporting her and welcoming her to their family with open arms. She definitely thinks this is the school she wants to return to in the future.
Mrs. Shields is very proud of both our performers and excited about the opportunity our students have been offered.
Circle in the Square began training actors in 1961. The school shares a theatre facility which presents commercial productions. At the moment the Circle in the Square facility is host of the Tony Nominated Broadway show Fun Home. 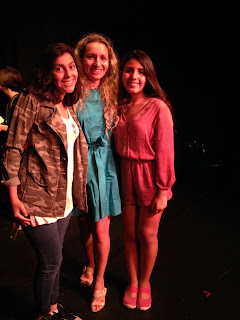