Circle in the Square Theatre School, the only accredited training conservatory associated with a
Broadway theatre in NYC, awarded County Prep Juniors Alexia Velazquez and Joshua Dunn full
scholarships for their 7-week intensive Summer Workshop in Musical Theatre. The scholarship covered tuition, transportation and lunch stipend for the entire program. The musical theatre workshops consisted of various Acting Technique classes as well as Singing Interpretation, Music Theory, and Musical Theatre Scene Study. Both Alexia and Joshua said that the program really pushed them as actors, helping them relate to characters, and exposed them to the expertise in acting, singing and dancing techniques of Broadway professionals such as Sybil Lines, Alan Langdon, Sara Louise Lazarus, Justin Boccitto, Beth Falcone, Jacqueline Jacobus, Elizabeth Loughran, Ken Schatz, Diana Schoenberg, Noel Katz. The experience gave them a taste of what it feels like to be on Broadway. A special perk for them was getting to know the casts of Fun Home and Wicked who share the same building.
The program culminated on August 12th and 13th with a musical theatre performance at the Stage 72
The Tryad NYC, a renown Off-Broadway venue on the Upper West Side, where both Joshua and Alexia closed the show with the songs “The Human Heart” (Once on this Island) and “Defying Gravity” (Wicked) respectively. They both received rave reviews and made us all so so proud!
Circle in the Square began training actors in 1961. The school shares a theatre facility which presents
commercial productions. At the moment the Circle in the Square facility is host of the Tony Nominated Broadway show Fun Home. 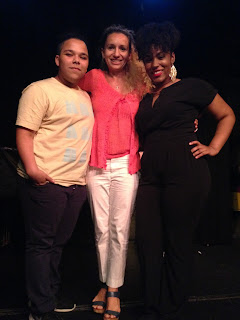