On May 21, 2015, County Prep High School had its annual Senior Prom at The Grove in Cedar Grove, NJ. The Class of 2015 and their advisors, Ms. Katie Termine and Ms. Kiki Garcia, came together at 7pm at one of the most beautiful venues in the state and had the time of their lives. The event featured not only County Prep’s students and their dates, but also many CP teachers who took time out of their evenings to take part in the graduating class’ celebration. The event actually started at 5:30 p.m. when Mr. Patten and his photography crew took pictures of the students. Cocktail hour began at 7 p.m. Students gathered and sampled appetizers and enjoyed refreshments while taking pictures with their friends. Mr. Thurman Carey, Psychology teacher at County Prep, who attended the cocktail hour said, “Senior Prom has always been an example of how mature our young adults have become. This group in particular really showcased their camaraderie and good spirits and they did it beautifully too!” 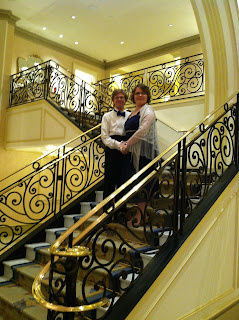 At 8pm, all of the students and teachers gathered to enter the elegant hall and have the best four hours of their lives. Miss Amy DeGise, a History teacher who taught many of the seniors said, “The Senior Class Prom truly exhibited the character of the Class of 2015.” All of the seniors were dressed elegantly. Miss DeGise called them “some of the sharpest dressers I’ve ever seen.” All the students had a great time and did not leave the dance floor all night, except when the delicious food was served. “Students united on the dance floor passing compliments and snapping pictures with each other all night long,” noted Miss DeGise. Approximately an hour before the night concluded, the prom queen and the prom king titles were awarded to Caitlyn Lindquist and Sean Eggers respectively, who were voted winners by the Class of 2015. Not just the students, but the teachers also had the time of their lives. “I had a ball with the seniors and their dates. I was so proud to see them looking so elegant and having so much fun. They truly made the night a memorable one,” replied Miss DeGise when she was asked if she had fun. County Prep’s 2015 graduating class really showed their unity that night.. Their maturity during the night showed that they are ready for their lives after they depart County Prep High School, but they will always be a big part of the CP family and more importantly a big part of each other’s lives.