Skip to content
(North Bergen, NJ—April 27, 2017) Freshmen in Joan Marie Bellotti’s World Literature classes celebrated Poem in Your Pocket Day, in which students constructed pockets and enclosed poems in each pocket, announced Dr. Joseph Giammarella, Principal of High Tech High School.
Poem in Your Pocket Day, originally initiated in 2002 by the Office of the New York City Mayor, in partnership with the Departments of Cultural Affairs and Education, functions as a part of the city’s celebration of National Poetry Month. In 2008, the Academy of American Poets took the initiative to all fifty United States, encouraging individuals around the country to join in and channel their inner bard. In 2016, the League of Canadian Poets extended Poem in Your Pocket Day to Canada.
In the case of Mrs. Bellotti’s class, students displayed the pockets on the walls outside of their classroom.  They invited students and staff to take a poem, read it, and share it with a friend.
“The freshmen hope that the shared poems will encourage High Tech students and staff to make poetry a special part of their lives,” notes Mrs. Bellotti. 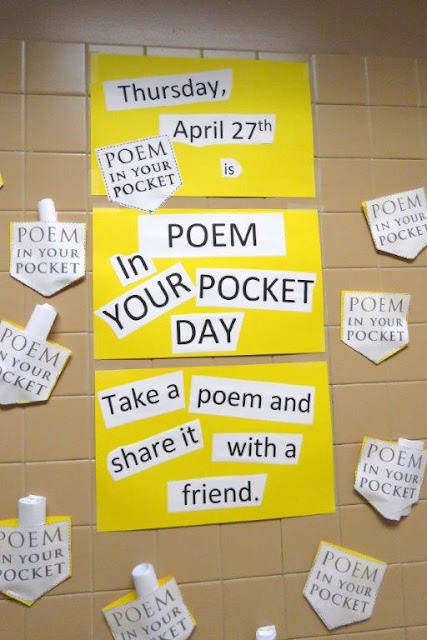