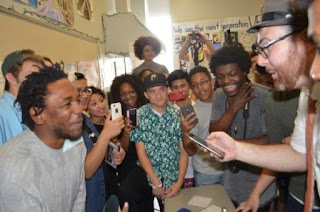 The visit came after a blog post by Mr. Mooney went viral and caught the attention of Kendrick Lamar, who is originally from Compton, California. Mr. Lamar’s management contacted Mr. Mooney to show their gratitude and they agreed to visit the school, free of charge, in early June. The HCST Foundation agreed to finance the supporting materials necessary for such an undertaking, the likes of which have never been seen at High Tech High School.

Mr. Lamar’s visit commenced with an intimate meeting in Mr. Mooney’s classroom with his World Literature, Hip-Hop Literature, and Slam Poetry Club students. These students shared their work with the artist, who discussed the impact of their work on his work before joining the students in a cypher—rapping and sharing poems in a small group. 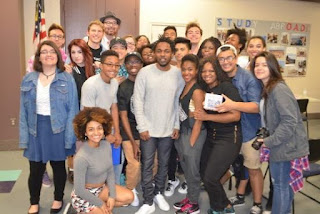 During the panel discussion, HTHS seniors Sade Ford and Ben Vock, both of Jersey City, shared poetry that was created in response to Lamar’s album, To Pimp a Butterfly. The panel—which also included Mr. Mooney—then commented on the artistic, personal, and political concepts contained in the student work. 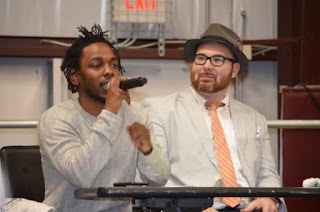 The event concluded with Lamar performing the song, “Alright,” and telling the crowd, “It’s truly a blessing to be in front of you all…I will be back.”

The unit of study which led to such a powerful culminating event initially began with students studying The Bluest Eye, a novel by Toni Morrison which deals with many of the same issues that Mr. Lamar discusses in his Grammy-winning album. Of the decision to include Lamar’s work alongside Morrison’s. Mr. Mooney said, ““Kendrick’s lyrics allowed students a deeper, more meaningful interaction with Morrison’s novel.” … … “We could not have made this happen without the continued support of the HCST Foundation,” Mooney added, “Their understanding of the need for innovative education has made a permanent mark on the students present today.” Allyson Krone, Assistant Principal at High Tech, expressed gratitude for Mr. Mooney and Mr. Lamar’s work. 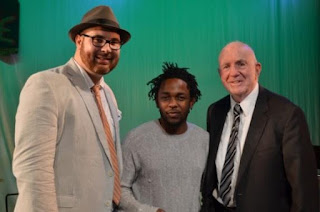 “Kendrick’s album touches on themes that are not just political, but also personal. Mr. Mooney created a space where students can discuss things like depression and oppression side-by-side. As an administrator, I’m lucky to have such a brave and dedicated educator on my staff. As a music fan and educator, I’m grateful that an artist like Kendrick Lamar was willing to come into such an intimate learning space and share his ideas.”

HCST Foundation President Daniel Gans said of the event: “The HCST Foundation is honored to have been a part of such an event. Mr. Mooney continues to innovate in his classroom and we exist to support that level of innovation. This event was unlike anything in High Tech’s history, and we are excited about what may come next.”

HCST Superintendent Frank Gargiulo added, “We welcome Kendrick Lamar’s visit because it allows us to showcase the progressive and culturally relevant work that our teachers and students engage in all year.”

Linda J. Quentzel, HCST Foundation Executive Director, added, “Brian Mooney continually strives to make education meaningful, and in this case he really hit the mark. We are always happy to support such powerful classroom work that can unite the community and capture the enthusiasm of the whole student body. ”