January 19, 2017 (North Bergen, N.J.) – The HCST Foundation’s Trustee Board meeting ushered in some significant changes to the Foundation’s membership, including the appointment of new Vice President, two Board Trustees and a new Development Coordinator, announced Daniel Gans, President of the HCST Foundation. 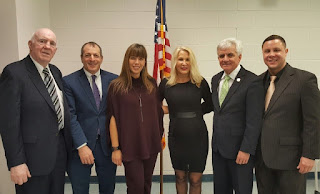 The Trustee meeting, which took place at Explore2000 Middle School in Jersey City, NJ, discussed the state of the Foundation and a review of the progress of the organization’s efforts in 2016. Most significantly, the existing Board unanimously confirmed several additional appointments to the Foundation including two new Board Trustees, Linda J. Quentzel and Joseph M. Muniz; Development Coordinator, Silverio A. Vega; new Vice President Laurent Lisimachio; and Advisory Board Chairperson, Amy Lin-Rodriguez.
Ms. Quentzel, the former Executive Director of the HCST Foundation, has lent over thirty years to the Hudson County Schools of Technology. One of the co-founders of the HCST Foundation in 2009, Ms. Quentzel’s appointment as Board Trustee comes as she retired down from her role as Executive Director on January 1, 2017.
Mr. Muniz, the current Board Secretary for the Hudson County Schools of Technology, has dedicated his career to public service in Hudson County. In 2015, Mr. Muniz was recognized for his work as the Chairman of the Board of Directors for the Hudson Community Action Corporation, an organization that provides federally qualified healthcare to the North Hudson area.
Mr. Vega’s role as Development Coordinator will aid the Foundation during Ms. Quentzel’s outgoing transition. Mr. Vega brings over thirty years of public service in New Jersey as Mayor of the Town of West New York, Hudson County Freeholder and New Jersey State Assemblyman.
Mr. Lisimachio, a Principal at the global architecture and design firm Gensler, has served previously as Board Trustee to the Foundation. In 2013, Mr. Lisimachio was the Gala Honoree for his work with the Hudson County Schools of Technology.
Ms. Lin-Rodriguez, principal of Explore2000, oversees the district’s Middle School, a school notable for its academically-integrated curriculum, has proven a deep commitment to quality education throughout her tenure in the district.
Foundation President Daniel Gans says of these recent appointments, “These are powerful additions to our Board and to the Foundation as a whole. Each of these appointments reflects optimism for the future of this organization, and their success will be critical as we move forward in pursuit of our mission. I congratulate them all, and look forward to working alongside them.”
HCST Superintendent Frank J. Gargiulo adds, “The Foundation continually attracts quality voices from all over our community. These voices and experiences are vital to the success of our students, our schools and Hudson County as a whole. I’m glad to see that the Foundation continues to find highly successful individuals to support our schools and programs.”
Download article as a pdf>>