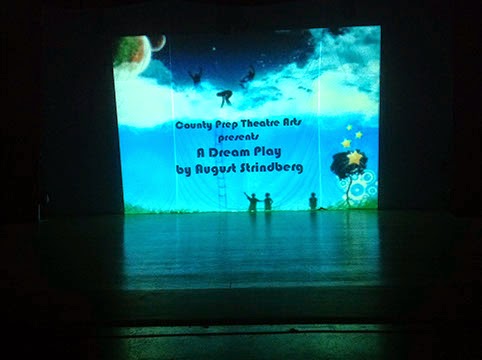 On May 29 and May 30th County Prep theatre arts students performed in the expressionist play A Dream Play, written by August Strindberg in 1901. The main character is Agnes, a daughter of the Vedic god Indra. She descends to Earth to listen to the problems of human beings. She meets about 40 characters, some of them having a clearly symbolical value. After experiencing all sorts of human suffering (for example poverty, cruelty, and the routine of family life), the daughter of gods realizes that human beings are to be pitied. Finally, she returns to the Heaven and this moment corresponds to the awakening from a dream-like sequence of events.

This play is truly unconventional, it follows a non-linear plot with time jumps and déjà-vues, it moves along mythical and real spaces and presents characters that in the author’s own words : « split, double, multiply, vanish, solidify, blur and clarify ». As the play seems to « imitate the disconnected but seemingly logical form of the dream … imagination designs and embroiders a medley of memories, experiences, free fancies, absurdities and improvisations. » (preface to A Dream Play by the Strindberg)

County Prep’s rendition of the play was very well received by the audience. Directed by Ms. Shields, the piece was chosen for its versatility and unconventionality. With a cast of 30 actors and a crew of 5 it has been a tour de force both due to the difficulty of the material and its sheer complexity. As the director and Drama Teacher Ms. Shields puts it, the process has been both rewarding and insightful: « We have truly embarked on an one of a kind journey, searching for answers and trying to present human’s fears, injustices, hopes and dreams as envisioned by the author. We have been questioning whether our world is nothing but the dream of a god or whether a poet is the creator of it all. We hope to make the audience ponder and decide for themselves, all the while learning about human connections or lack thereof, amidst of smiles, and laughter, anguish and hope. »

This production was overall an ensemble piece, where each performer was involved at all times, either on stage in numerous scenes, or backstage preparing the set, props, costumes, posters, sound effect, dramaturgy or program. Special recognition also goes to student sound and lighting technicians Joshua Lee and Chris Ortiz and to our stage and house managers Valerie O’Higgins and Scarlett Melendez.

Ms. Shields is very proud of all the actors, and crew who gave their all in our premiere rendition of this play as well as of the overall growth of our program. A special congratulation goes also to a few of the performers Ryan Wares, Juan Ferreira, Samantha Killion, Adam Hassan and Valerie O’Higgins who along with other County Prep students also performed in the Art House production of Music Man. The performers made the front page of The Jersey City Reporter of Sunday May 4th, 2014.