Skip to content
County Prep’s Improvisation Class Performs in the Fourth Annual Improv Show:
County Prep Live Season 2 on February 19th, 2018
Only two weeks after our very successful run of How to Succeed In Business Without Really Trying, County Prep theatre arts improvisers performed in our fourth annual improvisation and fundraiser event, County Prep Live Season 2.
The show was loosely formatted after NBC’s Saturday Night Live. It was hosted by Matthew Riccardi, and was dedicated to Chris Farley, on the occasion of the 20 year anniversary of his sudden and premature death.
The cast created the characters and the skits in their after school credited class. Together with Ms. Shields, the director, the performers picked some of their best work and put together a two hour laughter–filled event that stood out for its precise comedic timing, current events relevance and sheer fun. The performers in order of appearance were Sophomores Tyla Gibson and Dynajah Smith, Junior Ivory Love Torres, Freshman Kayla Velazquez, Junior Sirena Morales, Seniors Matthew Riccardi and Kyle Velazquez, Sophomores Yvelisse Vargas and Janell Garcia, and Freshman Gail Mulligan, Kim Caputo, and Jen Sarker.
Some of the highlights of the show were the Cold Opening: Hot Tea News, which introduced the entire cast to the audience, and Murder on the Train, a mystery orchestrated by a Russian mystery lady, played by Sophomore Tyla Gibson, and where a couple of French acrobats, played by Junior Sirena Morales and Senior Kyle Velazquez stole the show. Other audience favorites were Friday Update hosted by Matthew Riccardi and Shanqueesha, and the Two Grandmothers Skit, acted by Seniors Kyle Velazquez and Matthew Riccardi, Junior Sirena Morales and Sophomore Janell Garcia. As tribute to Chris Farley, the show also included three Chris Farley sketches from SNL, among which Matt Foley was clearly an audience favorite.
Ms. Shields is extremely proud of her extraordinary creative improvisers as well as the technical crew of the evening; student Light Designer Alexis Medel, student sound and lighting technicians Solimar Colombani and Delana Ramos, and students assisting with Make-up and wardrobe Karissa Cruz and Cindy Ramos.
Thank you all performers and crew for such an amazing performance! 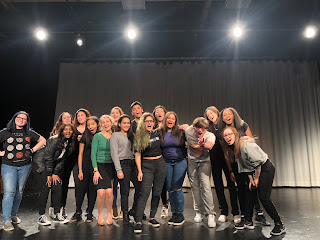