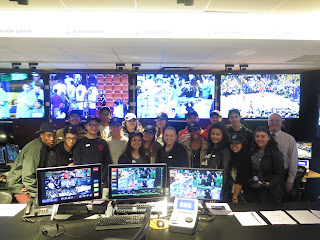 (Secaucus, NJ—April 29, 2016) Ms. Pica’s Audio Visual Production class visited the NBA Replay Center in Secaucus, NJ. The group had the privilege to meet Joe Borgia, Senior Vice President and Replay Referee at the NBA. Borgia explained that at the Replay Center they make strategic game decisions based on the use of HD cameras and fiber-optic transmitters.

Students handled various equipment used for playback of NBA games. They viewed games from four NBA arenas. One of such games included Drake in the audience! Ms. Pica’s class was also able to view basketballs from past years, including balls dedicated to Dominique Wilkins and George Miran.

Beginning with the 2014-2015 NBA regular season, the NBA launches its new state-of-the-art NBA Replay Center based in Secaucus, NJ. The studio is equipped with a groundbreaking high-speed arena network to enhance the performance and decision-making of NBA referees. The replay center is equipped with 94 HD monitors connected by fiber optic wires from all 29 NBA arenas.