Skip to content
(New York, New York — May 5, 2016) Ms. Pica’s Audio Visual Production class visited the Museum of the Moving Image in New York, NY. Museum of the Moving Image is the country’s only museum dedicated to the art, history, technique, and technology of the moving image in all its forms. Embracing a wide range of subjects, from nineteenth century optical toys to the latest in digital art, the Museum explores every phase of the production, promotion, and exhibition of moving images.
An interactive museum, students had the opportunity to record their voices over dialogue from a film, the same procedure that actors use when dubbing their lines in post-production. Students also recorded their own movements as a sequence of still photographs that were printed into a flipbook.
The class was able to view various film/TV set components from “Law and Order: SVU,” “Titanic,” “The Exorcist,” and much more. These include historic film and television cameras, television sets, sound recording equipment, costumes, set design sketches and models, make-up, fan magazines, posters, and an outstanding collection of dolls, toys, board games, lunch boxes, and more. 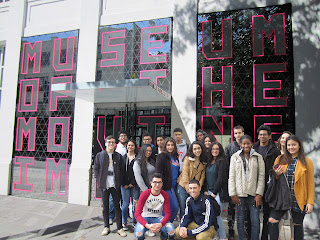