Skip to content
On May 14 & 15, the County Prep Dance Program presented its 14th Annual Concert, SPECTRUM.  The show included choreography by the students, instructor Ms. Heather Warfel Sandler, alumni John Hines and Crystal Vasquez, as well as Guest Artist Meagan Woods, a professional choreographer and dancer.  The sold-out show received rave reviews from long-time supporters as well as new audience members.  Myssi Robinson, a Mason Gross School of the Arts graduate and professional dancer for Jersey City’s Nimbus Dance Works, wrote to the students, “Congratulations on what was one of the most refreshing and heartfelt evenings of dance that I have seen to date.  I saw mature performances grounded in solid technique, a high level of compositional awareness, passion-filled stage presence, and a theater brilliantly pushed to its technical limits.”
This was a particularly exciting show, as it was the first performance since several renovations to the space, including new curtains, an expanded stage, a high grade dance floor, and tiered seating.  Ms.Warfel Sandler expressed her gratitude to the administration and maintenance department for supporting her design and vision for the new theater space.
The Dance IV students took full advantage of the audience’s new line of view by choreographing a unique finale which included video projection on the stage floor.  The dancers filmed themselves in various formations, and then interacted live with the movement in the video at the show’s end.  The show also included work based on social messages about race and street harassment, as well as their own personal stories.  “Like all of our shows here, our work gives the audience an opportunity to get to know who the students are through this art form.  Everything we do is a collaboration, which helped us to create this cohesive, honest performance. We are committed to continuing to push the boundaries of dance, and to challenging traditional ideas of what dance is supposed can be,” says Warfel-Sandler.  Congratulations!
See photos from the dress rehearsal here:
SPECTRUM CAST & CREW:
407 Dance Company
Alyssa Acciavatti, Gianna Diaz, Tamir Rios, Selah Rogerson, Tamijah Southerland, Diana Uribe
Dance IV
Naheema Bass, Giselle David, Veronica Figueroa, Scarlett Melendez, Emily Ruiz
Dance II
Amanda Abdelaal, Veronica Gagliardi, Mia Stephens
Dance I
Esmerelda Benscome, Samiyah Bryant, Roxanna Hernandez, Julian Purino, Kirti Persad, Delana Ramos
Gianella Sagbay-Flores, Sheron Scriven, Sonia Singh, Erika Toala
Guest Dancer Juan Ferreira
CREW:  Juliana Yeung, Christopher Ortiz, Kaylee Cox, Shannon Murphy 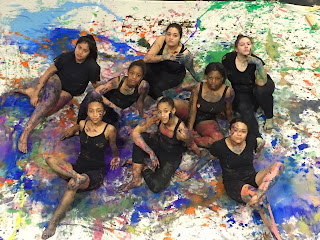