The story at the heart of Ondine may sound familiar, as it is the story of a water nymph who falls in love with a handsome knight. According to German folklore, an “undine” is a spirit of the water, a mythological being that once formed part of the building blocks of nature. There are however many versions of this archetypal story that have cycled through the Western world. In each of the versions, the entanglements between the seal-women in the human world lead inevitably to heartbreak and loss. The message seems to be that the marriage between man and the supernatural is nothing but folly, but it turns comic, enchanted and tragic.
Jean Giraudoux was not the only artist to give live to the story in 1939. The story was adapted into ballets, operas, instrumental music and eventually inspired Disney’s The Little Mermaid. Although the various versions of Ondine are based on the same old story, some end in different ways. One historical note, Jean Giraudoux’ Ondine was performed on Broadway in 1954 by none other than Audrey Hepburn and her then husband Mel Ferrer.
In our version, upon the occasion of our end of the year play and final exam for our junior and senior theatre students, we have taken some liberty to play with “the play within the play” theme present in the play and have stretched out the comedic moments throughout the play in the hopes of giving the audience some ease and enjoyment along our journey. We invited the audience to take a leap of faith and plunge in a journey into the world of the Rhine, peppered with fantastic creatures, stock Commedia Dell’Arte characters and people like you and me, full of dreams, taken on a whirlwind by the waves of life.
The audience reacted with wonderful comments such as “the play was very emotional”, “very funny, hilarious”, “took us on an emotional rollercoaster”, “a very meaningful play”. “This play is one of my most favorite plays of all times”, said Mrs. Shields the director, “I want to thank the cast and crew for giving their all to this production and bringing to life such a beautiful and unique love story that is Ondine.” 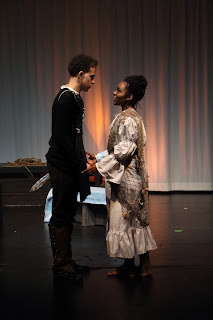