Skip to content
The County Prep Theatre Arts vocation students attended the Broadway Production of Time and the Conways, by J. B. Priestley, with Elizabeth McGovern (of “Downton Abbey”), a play under the direction of Tony winner Rebecca Taichman, performed at the American Airlines Theatre venue of the Roundabout theatre.
The play begins in 1919 Britain, where Mrs. Conway, played by Elizabeth McGovern, is hosting a lavish twenty-first birthday celebration for her daughter Kay, and later follows the family nineteen years later as their lives transformed drastically. This “poignant forgotten gem of a play” (Allison Adato, Entertainment Weekly), takes place at the crossroads of today and tomorrow, and weaves themes such as time, choice, chance and destiny.
Our students thoroughly enjoyed the play, loved the versatility of the acting of some of the actors such as Anna Camp, playing older sister Hazel, Charlotte Parry, playing Kay, or Gabriel Ebert, playing the brother, Alan, or Anna Baryshnikov, playing the younger sister Carol. But more importantly they enjoyed the truly human portrayal of the characters, evident in every single performance. Some left the theatre in tears, some left thinking of how choices and decisions affect one’s life.
The students also participated in a question and answer session with the actors, which they found fascinating and inspiring. Overall, this has been a very enriching experience and we are looking forward to more collaboration with the Roundabout Theatre in the near future, says Raluca Shields, the Theatre Arts teacher at Country Prep. 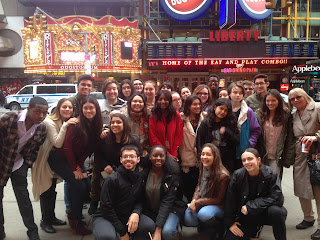