Skip to content
County Prep Theatre Arts Junior Kyle Velazquez participated in the ITheatrics Summer Theatre Program this summer. This company is known for making the high school, middle school and elementary school editions of big Broadway musicals. Acceptance into the program was already a big honor for Kyle, who loved everything about it, from stepping off the bus into New York City and walking on Broadway to the rehearsal studio to actually working on the show.

The program he was a part of was a week and a half long workshop that consisted of the directors teaching the music, casting the actors and choreographing a show that was already on Broadway and would soon become a school version. The cast would put on the show as sort of a test show, which then the directors and the CEO would consider for a school edition. Kyle found this was an intense working experience, trying to put a show together in such a short time, learning the music and choreography, and practicing the acting as well. Kyle especially liked being surrounded by others who share the same passion as he does, which he found was really comforting. Overall the experience changed his view of how to work towards his goals of being on Broadway and he would definitely participate in the program again. 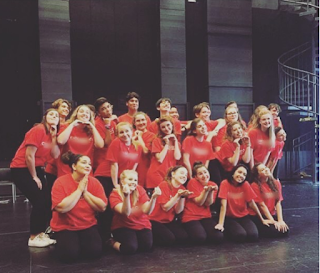