In just its fourth year, the after school Theater Arts credited course has brought a new

performance opportunity to County Prep students, who are learning both performance and

rehearsal practices and encountering first hand all of the aspects of professional theater. This

year in particular has been special due to both having complete live accompaniment, by our

Music Director Mr. Chuck Macklin, and having the show designed by a professional lighting

designer, Mr. Lance Michel. “This has brought our production to a new level and we are so

thankful to the administration and to Ms. Warfel for facilitating this” says Ms. Shields, Theatre

This year, the course focused on rehearsing and performing the musical Jekyll & Hyde (B’WAY),

play about the duality of human nature, as it is reflected in Jekyll and Hyde. Dr. Jekyll attempts to

create a potion to separate good from evil, but what ends up happening is that the potion simply

strips away the civilized veneer, exposing man’s essential nature. So the play becomes a struggle

attempting to answer lots of questions, and inviting the audience on a journey of self-discovery.

What really is good and evil? How do these concepts apply to the social structure of the

1888 London society? Is good only a façade? Or is good the inner essence of a human heart?

County Prep’s rendition of the musical was a tremendous success. Performed for two audiences

with standing ovations, plus an open dress rehearsal for Explore 2000 middle school, the

response has been overwhelming.  There has been a lot of buzz around the school of audience

members sharing their favorite moments. Some called it “marvelous,” some reported

“goosebumps” at various points, others pointed to being surprised by the quality of the singing

and the acting, and the virtuosity of our musical director.

Directed by Ms. Shields, Ms. Warfel-Sandler, and Mr. Macklin, this piece was chosen to

showcase our performers this year. Adam Hassan starred in the role of Jekyll/ Hyde, with Alexia

Velazquez as Lucy, Kaylin Vazquez as Emma, and Joshua Dunn as Utterson. . The cast also

Flores. This production was overall an ensemble piece, where each performer was involved at all

times, either on stage in numerous group numbers and scenes, or backstage preparing the set,

Ms. Shields, Ms.Warfel-Sandler, and Mr.Macklin are very proud of all the actors, dancers and

singers whose work has developed through our premiere rendition of this Broadway classic.

(MTI) All authorized performance materials are also supplied by MTI. 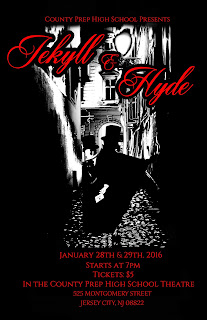