Skip to content
In just its fifth year, County Prep Theatre Arts class has brought a new performance opportunity to County Prep students, who are learning both performance and rehearsal practices, and are encountering first hand all of the aspects of professional theater. The show was designed by our professional lighting designer, Mr. Lance Michel, was directed by Ms. Shields, and was assisted by Ms. Singer.
Summer and Smoke is one of the more biographical and perhaps less known plays by the amazing American playwright Tennessee Williams, and is one of the plays County Prep students read in class in their Sophomore year. Its main theme is the love that nearly happens between Alma and John, two young people who, like two passing ships meet briefly and then go their separate ways. Yet, for that short time we get a glimpse into their individual longing.
The play focuses on the unmarried minister’s daughter, Alma Winemiller, played by Senior Kailyn Segovia Vazquez, and the romance that almost blossoms between her and the wild, undisciplined young doctor who grew up next door, John Buchanan Jr, played by Senior Adam Hassan. Alma is refined, spiritual and the epitome of modesty; whereas Buchanan, a doctor, is a sensualist who defies her with the soulless anatomy chart. By the end of the play, the two characters do change though, and seem to trade places.
The cast also includedSeniors Nyzira Lynn, and Jennifer Soderstrom, Juniors Kyle Velazquez, Matthew Riccardi, Julio Velazquez, Humberto Andujar, Terrell Wehner, Justin Cuevas, Katherine Castro, Quinton Cassillas, Sophomore Sirena Morales, and Freshmen Yvelisse Vargas and Miriam Martinez. This production was overall an ensemble piece, where each performer was involved at all times, either on stage in numerous group numbers and scenes, or backstage preparing the set, props, costumes, and program. Special recognition also goes to our stage manager and lighting technician Alexis Medel, sound technician, Delana Ramos and our backstage crew : Laura Revell, Katerina Kostadinas and Dynajah Smith.
Ms. Shields is very proud of all of the cast and crew whose work has developed through our rendition of this American classic. 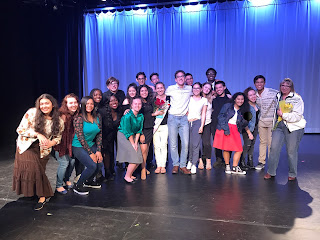