Skip to content
Congratulations to County Prep Instructor Nicole Pica and her students who placed in the Top Ten of Panasonic’s Kid Witness News National Video Competition! Leelah, a short film based on a true story, presents a new look at the ongoing battle for LGBT recognition. The film — produced by County Prep’s Audio Visual Broadcast Production Juniors Azhar Ali, Jeymmy Cuevas, Brianna Pitchford and Samuel Giron —follows the story of a 17-year-old seeking approval from her family on her journey towards self-acceptance. When she realizes that this would not be possible, Leelah Alcorn commits suicide.
The risk taken by the students on covering such a controversial topic led their video to place within the top ten of the Panasonic’s KWN Video Competition. Kids Witness News is a global video education program supported by Panasonic, with the aim of boosting creativity and communication skills. More than 175,000 children around the world have participated in the KWN program since it first began in the U.S. in 1989.
Congratulations to Jeymmy Cuevas, Azhar Ali, Briana Pitchford, Samuel Giron on their hard-work! A special thank you to Flora Keim and Ms. Warfel for starring in their production and making this video happen! 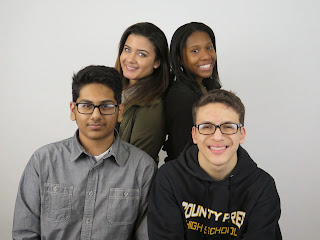