County Prep Junior Sole Stewart has been coding since middle school. Her mother spotted the opportunity for her to attend a “Black Girls Code” event at Pace University and Sole has been participating ever since. Recently Sole appeared on Good Morning America with the founder of “Black Girls Code,” Kimberly Bryant, to demonstrate their coding skills on the  T.V. program. Sole hopes this inspires others to code, particularly female minorities. Sole plans to major in Computer Science in college. 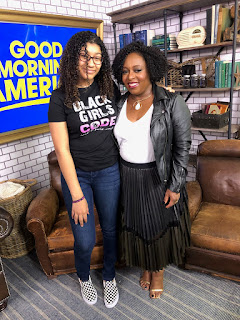 Check out this video of the broadcast. (5:26) Student Sole Stewart begins speaking about and demonstrating her
project, programming an object using Little Bits circuits.
http://abcnews.go.com/GMA/Living/video/black-girls-code-founder-opens-breaking-barriers-tech-53258502