Skip to content
County Prep’s Annual Talent Show was held on Friday, March 27th.  Once again it was a sold out event with a diverse line-up of performers, including vocalists, guitarists, ukulele players, and more.  Director Ms.Warfel Sandler commends all of the acts for their powerful and entertaining performances. There were two feature performances by senior Kyosuke Nonoyama and his band Hong Kong Graffiti, and David Sami with the acapplla group Sharkapella. The show was judged by teachers Ms.Torres and Mr.Carey, as well as professional artists M. Josephine and Lance A Michel.  Awards were given to the following students:
Best Act Overall – Alexia Velazquez singing “Radioactive”
Best Artistry – Martha Wachulec for her arrangement on piano and voice of “Rise Like A Phoenix”
Most Skilled – Jessica D’Onofrio singing “Maybe This Time”
Most Entertaining – Joshua Dunn and dancers for their rendition of “Uptown Funk”
Honorable Mentions went to two original songs:
“My Little Letter” written and performed by Juan Ferreira
“Fire” written and performed by Janel Schroth 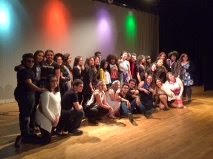