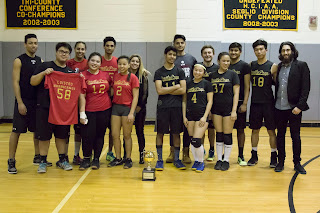 Bringing excitement and fun through a competitive event, County Prep High School hosted their annual volleyball tournament. From February 2nd to February 5th, students were invited to participate, watch, and join in on the head-to-head matches between six incredible teams put together by their own fellow schoolmates. Students took to the court for the title of 2015 Volleyball Tournament Champions. Starting off the week, preliminary games were held in order to find out who would go on to the semi-finals. “E-Team” claimed its victory in the semi-finals against the single Freshmen team “Team Freshies.” Moving forward, an invigorating championship match held between the two senior teams, “Team M’$” and “E-team”, would determine who would be crowned champion. A close, heart-racing game ended in “Team M’$” taking the trophy home and going on to play against County Prep High School staff members. A fun game against their own teachers ended in victory for “Team M’$” as well.
Special thanks to those who made the 2015 volleyball tournament a great success: Coordinator Diana Barrion for putting together a memorable experience for County Prep students; Lovelisa Vallacer for providing team jerseys from Chilltown Collective; Ghenaj Sanih and Patricia Ramirez for photographing and recording the whole tournament; and all the County Prep staff members who were involved.