migrations. Due to the low tide that day, the students were able to discover the sea life and

garbage that normally would have been hidden from view. It was shocking to them how much

the area had transformed compared to when they had gone seining in the early fall. The water

had receded drastically allowing them to discover a bed of sea snails, clams, horseshoe crabs,

Upon discovering a washed up horseshoe crab that was still alive, the park rangers

helped to move it to the shallow water where it could wet its gills and survive. The students

ancient creatures make their way up to the Delaware Bay to breed. In addition to how far they

traveled, the fact that these animals have been around for over 300 million years made the

After a successful day of making the beach a much cleaner place, the students prepared

to make one more stop before heading back to school. They went to see the goats! For those

that may not know, Liberty State Park is currently doing a habitat restoration project, using

goats to clear up both invasive and noninvasive foliage in a closed up area. Instead of using

herbicides or any other unnatural method that could disturb the environment, this is a much

more innovative way to achieve the same goal. In this way the park and the goats have

developed somewhat of a symbiotic relationship. The goats get to eat to their hearts’ content,

while the park can start fresh without invasive plants choking the natives out.

Although there were many other trips previous to this one, this one might be

the most memorable for students. Not only did they collect a lot of garbage, but they also picked up

lots of priceless memories and knowledge.
— Written by Yoonjin Shu 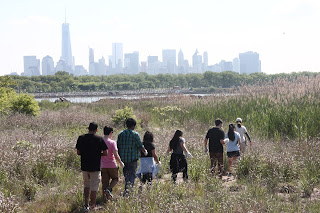