County Prep sophomore Adam Hassan plays a lead role in Art House Productions’ original play, The House of Atreus. He is performing alongside adult professional actors and members of the Actors Equity Association. Adam is a theater major at County Prep, and has performed lead roles in the school’s productions of In the Heights and The Wiz.  He is also a member of Ms.Shields’ Improv Theater class, and has already graced the County Prep stage many times.

In The House of Atreus, Adam plays the son of a man returning from war.  This intense and unconventional production (recommended for ages 14 and up), is an immersive show, as the play happens on all sides of a moving audience.  Much of the story is also told through dance.  It is a one of a kind show, and has received such a great response that the run of the play has been extended another weekend.  The extension is unprecedented at the new Art House Theater at Journal Square.  The piece was created by director Mason Beggs, who also directs work for St.Peter’s University, Art House Productions Executive Director Christine Goodman – a leading and highly regarded figure in the Jersey City Arts scene, and choreographer Meagan Woods – who also directs County Prep’s 407 Dance Company.

The County Prep Performing Arts programs have strong ties to local professional dance and theater, and this is a prime example of how those connections provide opportunities for our young artists.  We are so proud of Adam’s accomplishment in this endeavor.

For more information and tickets: http://www.arthouseproductions.org/event/the-house-of-atreus-4/ 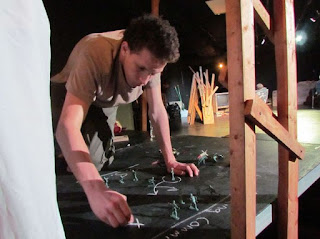