Skip to content
County Prep Theatre Arts News
County Prep’s Matthew Riccardi won the Judge’s Award for his monologue from Shakespeare’s Romeo and Juliet
County Prep’s Theatre Arts’ production of Ondine has received four Foxy Final Nominations for Montclair State University Theatre Night Awards!
On March 9th, at the Teen Arts Alliance competition at New Jersey City University, Theatre Arts Junior Matthew Riccardi won the Judge’s Award for his rendition of Benvolio’s monologue from Shakespeare’s Romeo and Juliet. His performance impressed the Judges with its clear understanding of the text and its truthfulness. Congratulations to Mathew and all of our other competitors this year.
Mrs. Shields is also very excited to announce that our production of Ondine, by Jean Giraudoux, has received nominations for Outstanding Achievement for an Acting Ensemble of a Classic Play, and three Outstanding Performance Nominations for Senior Adam Hassan (Outstanding Performance by a Lead Actor in a Classic Play), recent graduate Alexia Velazquez (Outstanding Performance by a Leading Actress in a Classic Play), recent graduate Jose Lupianez (Outstanding Performance by a Supporting Actor in a Classic Play).
The Awards will be announced during the Theatre Night Awards on May 15th, 2017 at Montclair State University. This program has been established in 2009 by Montclair State University Theatre and Dance Department professor Susan Kerner and Mahwah High School teacher JoAnne Fox. They conceived the event to provide a balance for the popularity of the high school musical and its celebration at well-established awards ceremonies in New Jersey and the region.
This competition is open to all secondary schools in the state of NJ, and only to straight play production. The event is a positive educationally based community building experience.  Students are able to share their work with other students and to be recognized outside their own high schools.  This outside recognition has direct benefits for students and teachers in districts throughout the state. 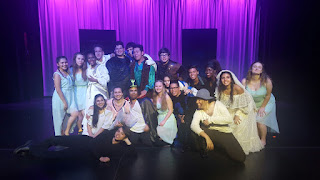